Duryodhana lay dying on the battlefield.

He took shallow breaths, his life hanging on by a thread, as tears rolled down into the soil.

His mind raced as they thought of the mistakes that had brought about his tragic end.

“If only,” he thought, “I had chosen to have Krishna on my side, instead of choosing to have his army.”

“If only… “ he thought, “I had built a fort around Hastinapur to make it impregnable.”

“If only… I had Vidhur by my side to give me foresight, I may have fared better…”

Krishna, who loved Dhuryodhana as dearly as he loved Arjuna, watched the warrior as his breath refused to leave his body. The Omniscient One smiled to himself as he divined the regrets that kept Dhuryodhana chained to his mortal remains.

He then said, “O Dhuryodhana. Stop a moment to think. When you came to my bedside to request for my help before the war… You thought that I was asleep. I was only pretending to be so. I ‘woke’ only when Arjuna entered. You made the choice to take my army only because you took a calculated decision without thinking. I pretended to be asleep so that you would have no time to think…”

He continued, “If you had built a fort around Hastinapur, I would have Nakala, who rides faster than the rain, raze it to the ground.”

“And if you had got Vidhura to the battlefield, I would have been forced to kill him. Which leaves you with the same end that you are experiencing now…”

A few moments later, jubilant Kaurava men arrived there holding five heads that had been lopped off. They were the heads of the sons of the Pandavas. “Oh,” whispered Dhuryodhana, “I had asked you to kill the Pandavas, not their sons. By doing this, you have deprived Hastinapur of its future generations!”

In deep pain, he closed his eyes. At the moment, in a flash, he saw what his Ego had kept masked – destiny, as Krishna had said, had already planned his last moments. The killing of his nephews had lifted the veil. He realised that all regrets had no meaning and that it was time to let go and thus he dies.

Duryodhana went straight to heaven as he died a Kshatriya’s death, doing his duty – as explained by Krishna in the Gita.

EGO was Duryodhana’s weakness, prompting him to jealousy and hatred.

The Kaurava king is revered in many parts of the country. The biggest temple to him is Uttaranchal in Jakhol in the Tons Valley. Other temples to him are in Osla, Gangar and Datmir in the same state.

Drona, the commander of the Kaurava army, had vowed to kill both Krishna and Arjuna on the battlefield. That night, Krishna could not sleep. He paced up and down in his tent, pondering on how they would escape the Archarya’s killer moves. For Drona was Arjuna’s own guru, who had put him through the paces towards becoming a warrior.

So restless was Krishna, that he stepped out of his tent and walked towards Arjuna’s. But to his surprise, he found Arjuna blissfully asleep.

He shook him awake. “O Arjuna,” said he, “Aren’t you afraid of tomorrow? Drona has vowed to kill us both and that is no mean resolution.” 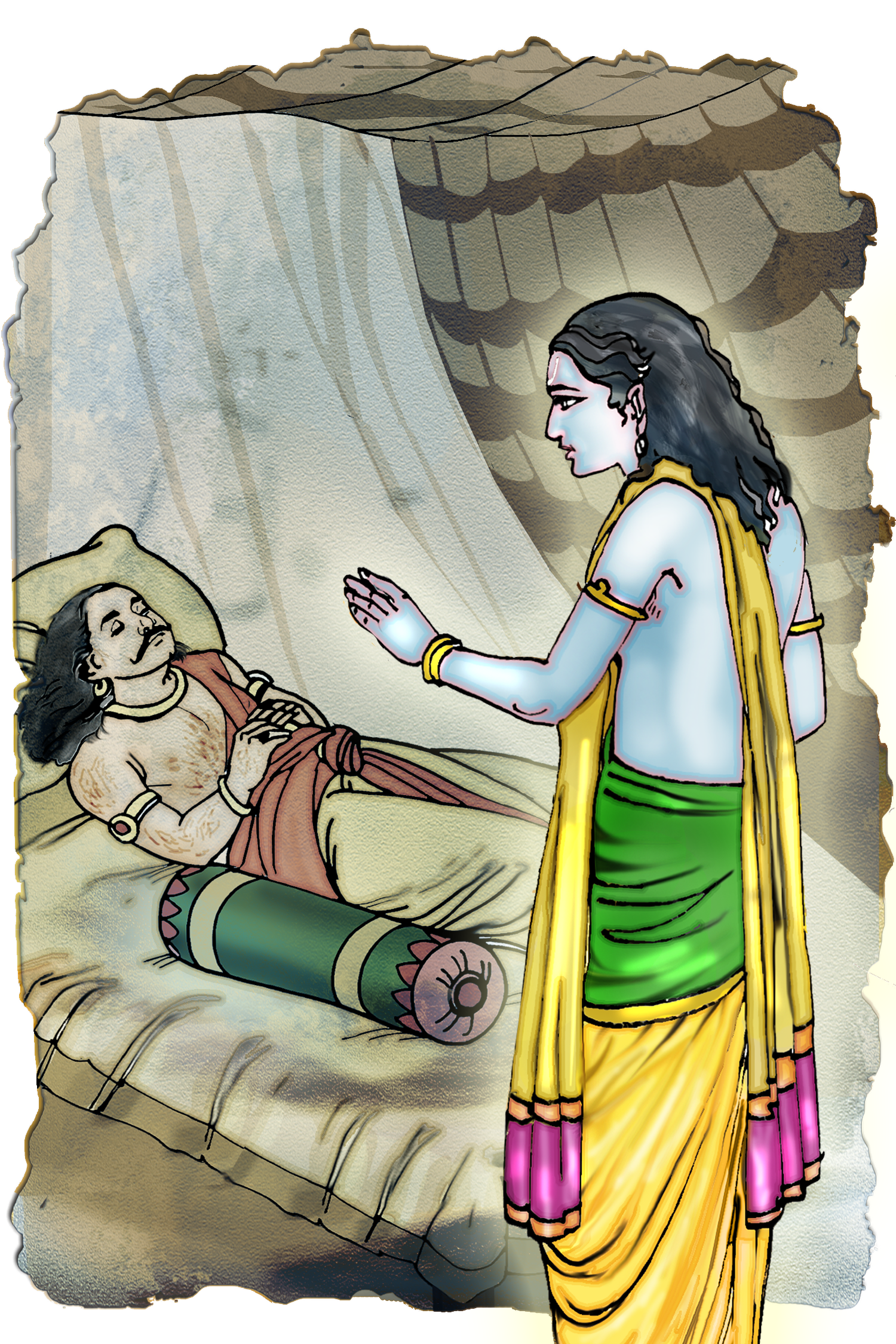 Arjuna stretched sleepily and replied, “O Krishna. What worry should I have when you are by my side? Allow me to sleep.”

He rolled over and fell asleep again.

FAITH liberates you from fear and its consequences.

When Duryodhana was born, his happy mother Gandhari named him Suyodhana or ‘great warrior’. However, he later preferred to be called by the name ‘Duryodhana’ or ‘he who is unconquerable.

Duryodhana is believed to be an avatar of the Demon Kali.

In character, Duryodhana was a generous and righteous king. He was brave and straight-forward. In fact, Krishna was fond of him. Unlike Dridharashtra, he was neither a coward or a hypocrite. The blind-king hid his real nature under a cloak of being kind, while really, his love for his sons made him do incorrect things.

However, Duryodhana was not so. He ruled his kingdom well, and his subjects were happy under him.

It was this jealousy that made him do acts that put him on the path of war – the Mahabharata.

Vedic Mantra for protection from fear of COVID-19

powered by Advanced iFrame free. Get the Pro version on CodeCanyon.